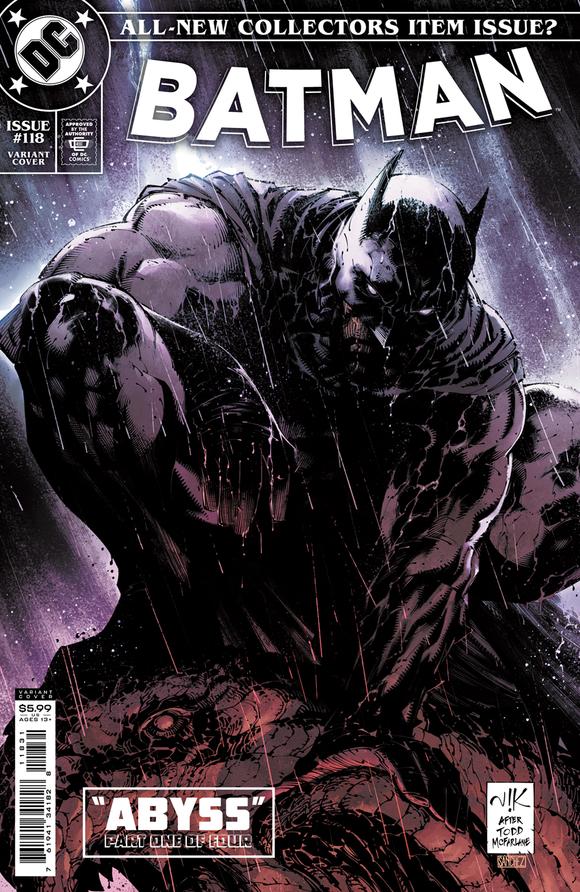 UPDATE (11/22/2021): We have some sadness and some gladness to share, as Marge Simpson once put it. First the sadness: The final order cut-off date has passed for Batman #118, and so we’ve taken its page down for now before we oversell the issue and invite the attention of some masked avenger who’s concluded that comic book retailers are a cowardly and superstitious lot. (Which is half true… but which half?)

But the gladness is that this pre-sale experiment has proven to be such a success that we’ve decided to offer not only the milestone Detective Comics #1050 (with its many, many covers) for pre-order, but DC’s entire range for January and beyond! And that’s not all: Marvel, Image, Dynamite, and Scout books starting from January are now all available for pre-order, with more great publishers going up in the coming days! Wow!

The comics world is all abuzz about Viktor Bogdanovic’s upcoming Batman #118 variant cover, a fun, fond homage to Todd McFarlane’s classic Spider-Man image from the cover of 1990’s Spider-Man #1! Originally a 1:25 retailer incentive variant, it quickly captured the imagination of the comics community, and DC has responded to the demand by making the issue available as an open-order variant.

It’s sure to be a hot seller, and if you want to lock down a copy for yourself right now in the name of peace of mind, we’re now taking pre-orders here on our site! All orders within the state of Arizona will have the option of local pick-up in addition to the delivery efforts of the hard-working men and women at the USPS. Don’t miss the start of this landmark new Bat-era!