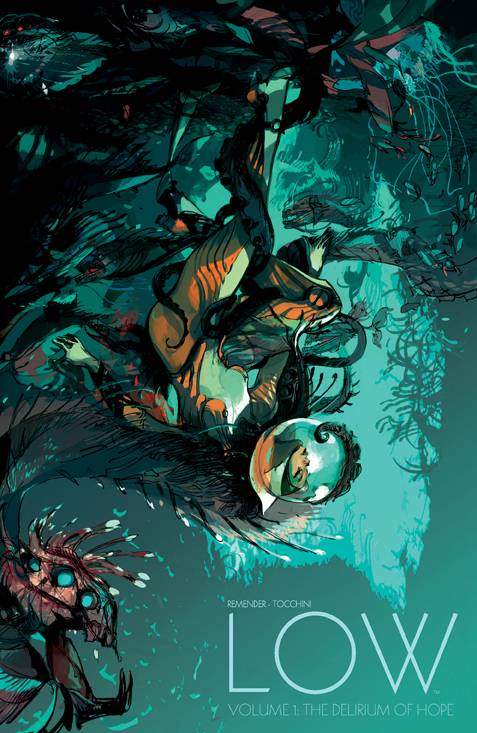 The next Ash Ave Comics’ Comic Book Club discussion group is Sunday, November 1st at the shop!  We’ll be gathering at our usual time of 6 PM to discuss volume 1 of Image Comics’ Low by Rick Remender and Greg Tocchini.  We’ll also return to two discussion groups a month in November, like we did earlier this year when we began a second reading group to read and discuss the entirety of The Invisibles series.  This time we’ll be reading the complete Preacher series by Garth Ennis and Steve Dillon, the next meeting will be held Sunday, November 15th at 6PM at the shop where we will discuss volume 2.

For December, we have Grant Morrison and Frank Quitely’s All Star Superman and Preacher volume 3 scheduled.

A reminder that our current Reading Club titles are 20% off of the listed price, and we encourage anyone interested in attending the reading group to prepay for the next monthly title a few weeks ahead of time.  Check out the cover image and summary of our next titles below.

Millennia ago, mankind fled the earth’s surface into the bottomless depths of the darkest oceans. Shielded from a merciless sun’s scorching radiation, the human race tried to stave off certain extinction by sending robotic probes far into the galaxy, to search for a new home among the stars. Generations later, one family is about to be torn apart, in a conflict that will usher in the final race to save humanity from a world beyond hope.

Dive into an aquatic fantasy like none you’ve ever seen before, as writer RICK REMENDER (BLACK SCIENCE, Captain America) and artist GREG TOCCHINI (Last Days of American Crime) bring you a tale mankind’s final hour in the cold, deathly dark of the sea.

In this new trade paperback collecting PREACHER #13-26, Jesse Custer, his girlfriend Tulip and their vampire friend Cassidy head west to a party of Babylonian proportions. Then Jesse flies to France to rescue Cassidy from the clutches of religious fanatics. His search leads him into battle against the forces of the mysterious organization known as The Grail.