DANCING – an evening of dancing to your favorite songs
BEST JAMS SELECTED BY: Drew, Laine, BEAST INFECTION, and Sarah R.

Ash Ave Comics will once again be a presence at the annual Phoenix Comicon, now on of the largest conventions in the United States.  Stop by our booth, located at #891 (highlighted in the center of the image below),  we’ll have tons of comics, toys, shirts, and other cool stuff on sale for the duration of the con.  We’ll also have all sizes filled of our popular Ash Ave Comics shirts, including the original skeleton design by Hunter Hancock, the colorful work of Jim Mahfood, and the Ash Ave Comics skull vehicle designed by Geof Darrow (now in white ink on black tees).

See you at the craziest comic and pop culture gathering in Arizona!

This is his first appearance in Arizona in nearly 20 years, and his first as a guest at the Phoenix Comic Con.  Geof Darrow will be at the Ash Ave Comics & Books booth located at #891 and #893. 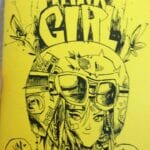