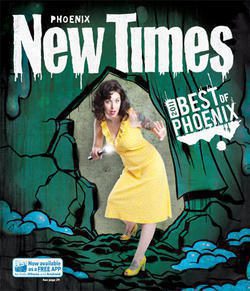 Ash Ave. Comics won our second Phoenix New Times’ Best of Phoenix award for the best comic shop 2011!  Check it out our write-up for “Best Place to Buy a Comic Book” on the Phoenix New Times site, we’ve also posted the text below:

Pop quiz, comic geek: What do fossil records and comic shops have in common? Answer: Both are a window into a time and place that have long since passed. The glory days of comic stores with their boxes jammed full of meticulously plastic-sleeved, cardboard-backed wonders may be gone, but you can relive the memories of them at Ash Avenue Comics. In this shop, spandex-clad superheroes continue their eternal quests to defeat the forces of evil (also in spandex) 24 pages at a time. Just be prepared to wait for the shop to open. There are posted hours, mind you, but they’re a bit more like guidelines than hard-and-fast hours of operation.

DC Comics recently published the first of its re-launched comic books as part of an initiative in which 52 comic book series, including “Batman” and “Superman,” will re-set to issue No. 1 with revamped characters and retooled storylines and run online for the first time.

Are the two interlinked? Maybe. The owner of Atomic Comics in a letter to industry folks said online purchasing and downloading of comics may have had some impact on his business.

What’s really happening on the larger scale, said Albert Ching, a contributor with Newsarama.com, a site that follows happenings in the industry, is that the comic book industry, both locally and nationally, is in flux.

DC Comics is the first outlet to offer its books in both a print and digital form. They plan to release the digital incarnations of their hardcopy comics on the same day as their print versions.

Chingsaid DC has been losing its market share to rival Marvel for years, and that’s one of the reasons they went with a re-launch.

“I think they wanted to do something splashy that would return to them to the forefront of everyone’s minds,” he said. “They’re looking to attract new readers while at the same time not alienating their current audience, which is a tricky thing to pull off. Digital distribution is definitely part of their strategy, and we’ll see in the coming months if it all pays off.”

Ching, who worked at Atomic Comics from 2002 to 2004, said that while some may think this shift to digital property was the force that led Atomic Comics to close their doors, he doesn’t think that’s the case.

“[Digital distribution is] an area that’s definitely growing, but is still too proportionally small of a market at this point to have that kind of impact. In a few years, the landscape will probably have changed quite a bit, but ultimately, I think it’s hard to own one locally-owned shop in this economy, and Atomic had four, all in high-profile – and thus, presumably high-rent – locations.”

Mike Malve, founder and owner of Atomic Comics, wrote in a blog-style letter entitled “My Final Report” that was sent to industry insiders and widely circulated online in comic book blogs that the slumping economy had been a growing problem for the chain, which had been in operation for over 20 years. “The villain in this tragedy is the economy,” Malve wrote. “I had hoped to be the superhero and triumph over the recession, but sadly the economic downturn of the past five years has proven to be unsustainable.”

He goes on to write that an October 2006 car accident in which a 16-year-old uninsured driver drove her car into Atomic Comics’ Mesa location pushed the company over a financial ledge they were never able to come back from.

The store was closed for several months so it could be reconstructed. That was traumatic enough, but Malve wrote that it was the loss of customers that really stung.

“It seemed as if half our customers never returned,” he wrote. “The great mystery to me is what exactly happened to all those missing customers. … I can only assume customers found other means to obtain their comics, maybe they started driving great distances to hit up other stores, some possibly went the way of the Internet and are now ordering their books online or perhaps even downloading their books illegally, or maybe even some stopped collecting comics altogether.”

Malve wrote that he remains hopeful, however, especially with DC’s re-launch.

“With DC’s September release of the #1’s, Marvel’s makeover of key books and continual growth, and other publishers working hard with some amazing new and exciting content, there is hope on the horizon for the direct market,” Malve wrote.

Drew Sullivan, owner and operator of Ash Avenue Comics in Tempe since its opening nine years ago, said the expansion of DC’s market makes sense.

“If [DC] can find any more markets to expand in to, then they’ll do it,” he said. “Six or eight months ago, people were probably scratching their heads thinking, ‘Where are comics going to go?’ and ‘How are we going to maintain interest?’ I think they did a great job as far as getting people re-interested in comics. It’s pretty exciting, a lot of customers are excited about it and I’m looking forward to a lot of the new books.

Sullivan said he’s not a fan of digital comics, but added that he understands that DC had a business decision to make.

“After a day of staring at a computer at work, I get out of here and I go home and I read some of my books that I’ve picked up for the week,” he says. “It feels like I’m giving my eyes a break, like it’s almost like therapy, to not stare at a glowing screen hurting my eyes again, I love that. It’s a relief in a world where we’re constantly having flashy bright screens in our face.”